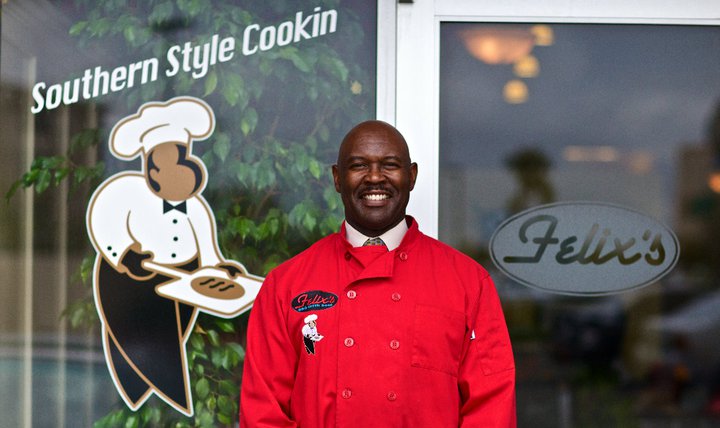 Our story begins with Felix himself, and the road that led him to open one of the most sought after BBQ restaurants with southern flair in San Diego county.

Felix’s mother was a beautician and she did hair for the wife of a gentleman by the name of James Mitchell who was the owner of a BBQ restaurant right down the block of from his house, from the time Felix was 12 until he went off to college he worked at the BBQ restaurant where he learned a lot of things from Mr. Mitchell. The thing that stuck out the most was that Mr. Mitchell said “the flavor comes from the smoke”.

After college Felix chose to work in restaurant management, he opened a few of his own businesses and even bottled his own BBQ sauce. Living in Ohio, Chicago, and then settling in California although he was not currently in the restaurant business, he found himself craving a taste of home. Felix stumbled into a little place called Ruth’s place. Ruth reminded Felix of his mother, and they became fast friends. She made delicious southern food, and she always dreamed of having a bigger place where people could come in and dine.

Working as a tax consultant at the time Felix decided he wanted to support Ruth in her dream to open a dine-in restaurant. He found a location in Oceanside CA and began the process of setting things up. Not wanting to disappoint Ruth if things didn’t work out, Felix decided to keep his plan a surprise to present to her in the future.

When he finalized the lease he went straight to her home excited to present the news. Her daughter answered the door and informed him that Ruth was in the hospital. Very concerned for his friend, Felix headed straight over there. Ruth was overwhelmed with joy when he told her the news. Unfortunately, she had some devastating news of her own. She had just found out that she had cancer and was terminal. It wasn’t until he was driving home from her funeral that he decided to move forward with the plan in her memory. So began the wonderful journey of Felix’s BBQ with Soul!

Felix is committed to hospitality, and his desire to bring Southern charm and smiling service to all of his patrons in addition to serving quality BBQ is what keeps people coming back.